When Ships' Timbers was established in January 2013 with our Museum boundary defined within the County of Conwy, one of our first tasks was to identify the location of all the former Llandudno Lifeboats. We did this because as a contemporary Maritime Museum we decided to include the acquisition and restoration of boats of local, national and international importance within our articles of association. Our intention is to have a Museum Collection of model and seaworthy boats.

Tracking down the location of the old Llandudno Lifeboats was not an easy task , but with the help of the Historic Lifeboat Owners Association  http://www.hloa.org/ and Quinton Nelson of Nelson Boats Donaghadee  http://www.nelsonsboats.co.uk/ we now have a better idea of where some of them are.

Unfortunately none of the old pulling and sailing lifeboats are available. Indeed apart from Theodore Price, which was sadly broken up in Lancaster in 2000, their whereabouts are unknown! This means although we don't know where these boats are at the moment, with the strong possibility they have been broken up, it is possible that one might be lying abandoned somewhere, so there is always hope! 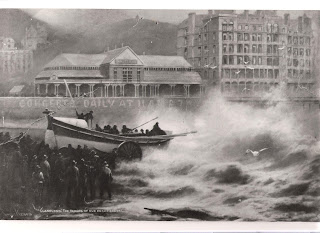 This list was much more promising for us, and after further investigation and with on-going help from Quinton Nelson, we were put in contact with Tillie's former owner in Hartlepool.